Flowers on the gun barrel of a replica of an assault rifle, that  serves as the handle of the main entrance door of Shiva’s SALUTE salon, gives the message of peace at a time when the world is witnessing violence and the threat of a war looming large in strife-torn Afghanistan. 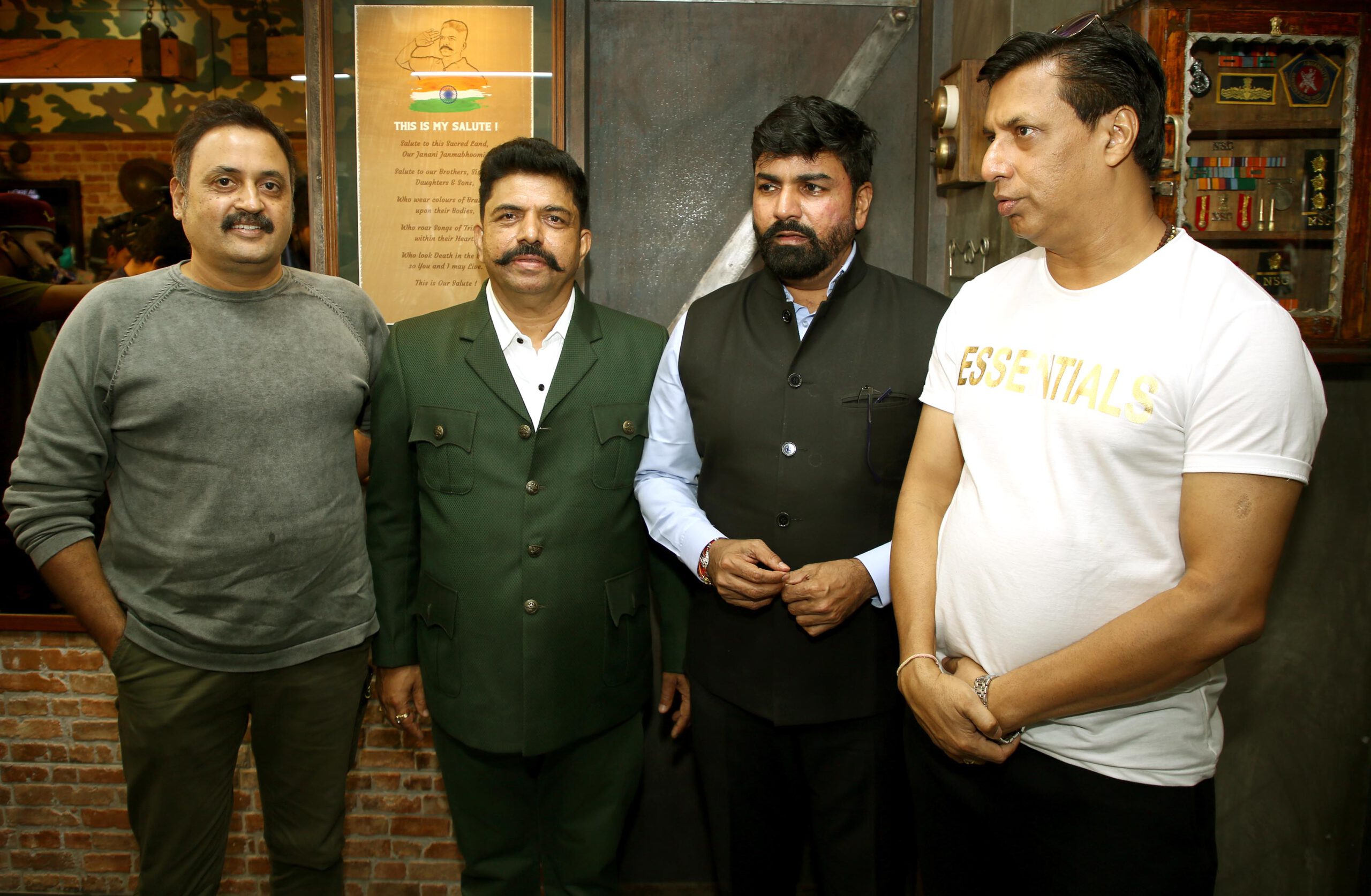 As the events unfold in the subcontinent and keep the world on tenterhooks, in Mumbai Shiva’s SALUTE  pays homage to the Indian Armed Forces, martyrs and all those who sacrificed their life for the country.

After the successful launch of SALUTE in the Queen of Suburbs, Bandra recently, the new themed  Shiva’s SALUTE came up in another upscale suburb Vile Parle (East) in the city.

The salon is named SALUTE as a mark of tribute to the bravery and valour of the Indian Armed Forces. The interiors are designed to show visitors what a typical army barrack looks like and how tough it must be for the forces to spend days and nights in difficult conditions. 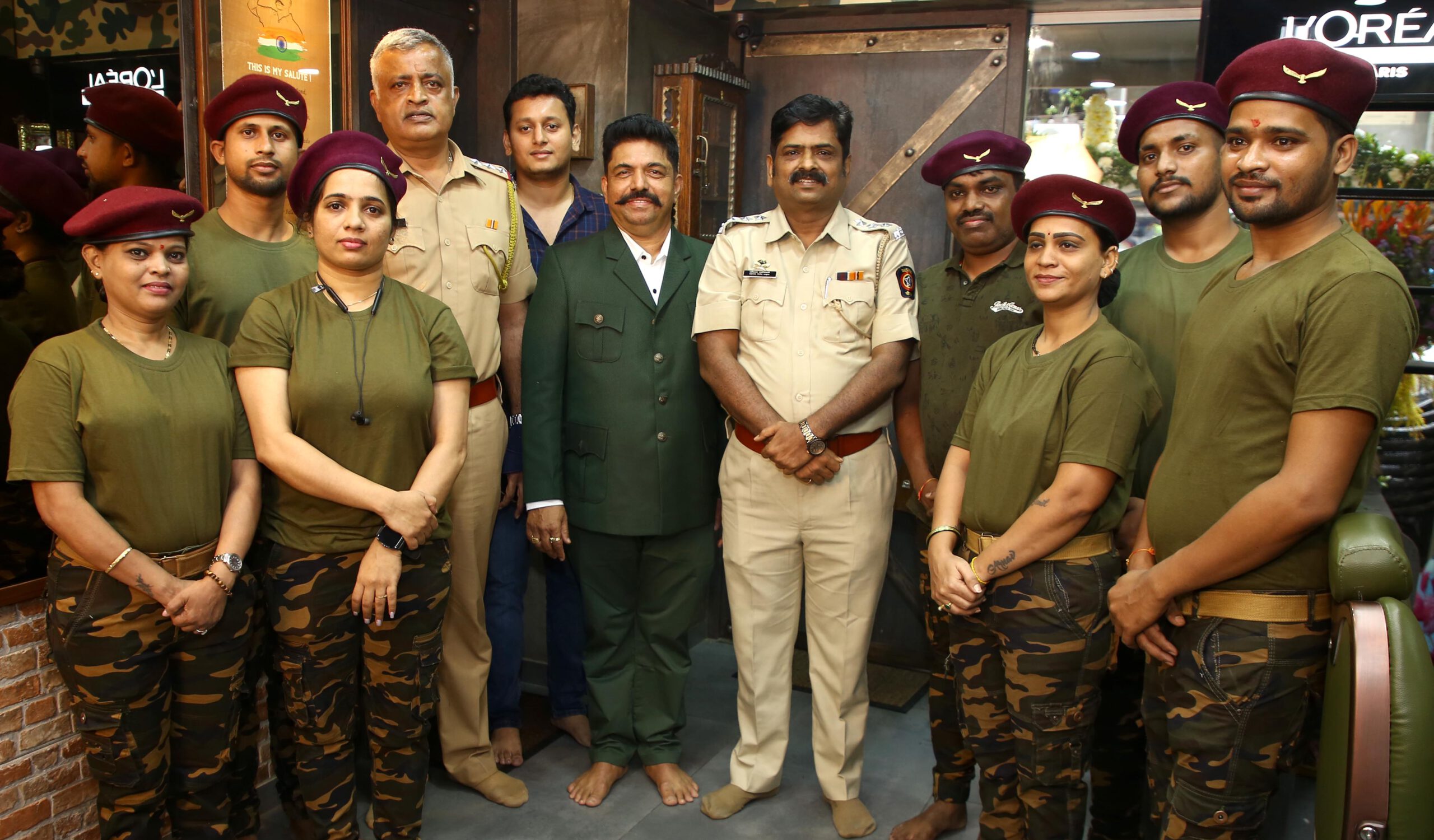 ACP Avinash Dharmadhikari praised the efforts of Shiva, the hairstylist, proprietor and the brain behind this unique concept and said that he salutes him for his efforts at dedicating the salon to India’s Armed Forces.
On the occasion, Shiva said the word SALUTE instantly creates an immense feeling of pride towards our men in uniform. Quite appropriately, not only does the salon instill a sense of pride but also stirs patriotic feelings as one steps inside.

The interiors are decorated with army paraphernalia resembling life in a barrack. The brick walls that bear a rugged look have old-styled small functional mirrors that army men use while shaving. The vintage electric switches, rare in use now, transport a person to another era. There are military boxes, kits, bullet boxes, logs of wood, badges, helmets, an old model of a military aircraft and a motorbike.

There is also an exclusive photo frame of Netaji Subhash Chandra Bose in uniform. Interestingly, the wall decor matches with the green attire, resembling military fatigues, worn by the staff. Shiva, himself dressed in a green coat, announced that a portion of the profits would go to the Army Welfare Fund.

The house of Shiva’s is a chain of 23 salons, located across the length and breadth of the city. They are already a known name with a large spectrum of customers from the glamour, fashion, show business and corporate world.

At Shiva’s SALUTE, hairstylists are specially trained to offer military-styled haircuts and the overall look. It is an effort to remind the young generation about how the Indian Army is always vigilant 24/7 to defend our borders and to provide invaluable help to the people of India during all calamities. 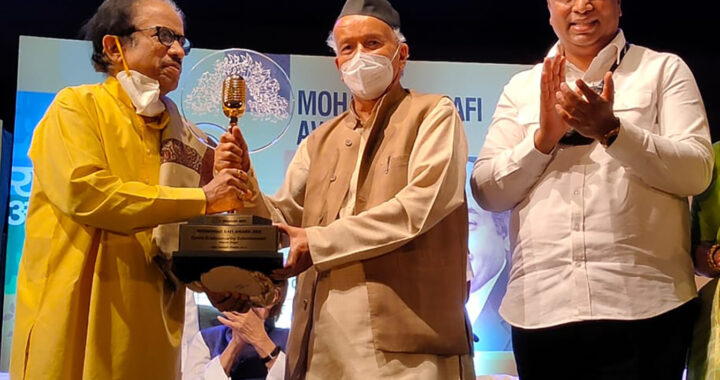